Every September, people in India celebrate Ganesh Chathurthi, the birthday of the elephant headed god Ganesha As part of the celebrations for Ganesh Chathurthi it is customary to buy a new statue of Ganesha (which, in India is sold by the dosens in the street) and a few days after the celebrations, dissolve the Ganesha in water.

Yesterday was Ganesh Chathurthi and we decided to spend the evening making Ganesha statues out of salt dough. We used the basic salt dough recipe
1 cup flour,
1/2 cup salt,
2 tsp vegetable oil
sufficient water to make up a dough.

While the girls were busy in the evening working with some stickers, I whipped up a batch of dough. I didnt want to give the children too many instructions, which I would be likely to do if we made one Ganesha. So I divided the dough into three batches, with the instructions that the girls could do with them as they wanted.

I also put a couple of our home Ganesha statues on the floor as a template, if they required.

So began the time for creation: A lump of salt dough, a statue of Ganesha 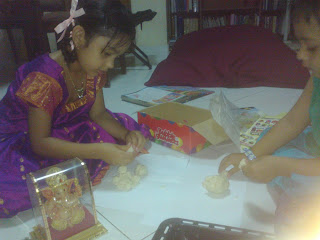 Anjali soon had her initial prototype. The thing about Ganesha statues is that it is pretty hard to go wrong with one - the trunk and the fat belly make it so obvious that it is a Ganesha, this is probably why there are so many artistic renderings of Ganesha statues 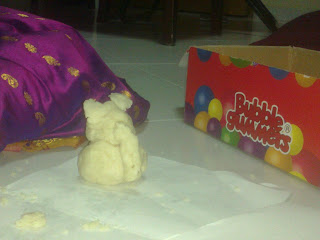 This is what I came up with 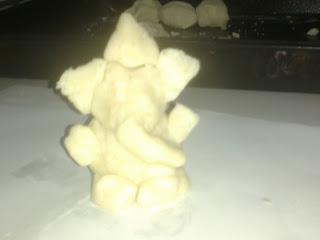 And here is Anjali. She was very proud of her modelling. 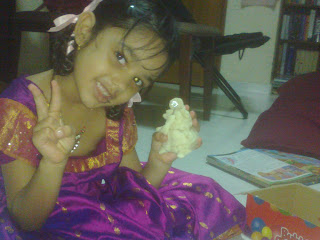 And a close up on her Ganesha, when it was finished. I gave the girls the bead box for decorating the Ganeshas 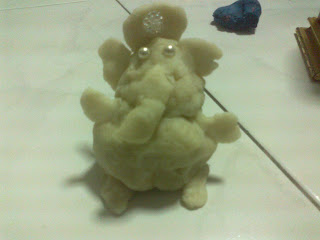 Somewhere in the middle, i wanter to attach a lamp to mine, and Sophia (who was mostly decorating a Ganesha statue that I had made), also wanted a lamp. Then Anjali asked for one as well, but we realized that we had run out of salt dough. Instead of making a new batch, I advised her to make a colored lamp out of last week's home made playdough, which is basically the same recipe, except with food coloring and cream of tartar. So she fashioned a blue lamp 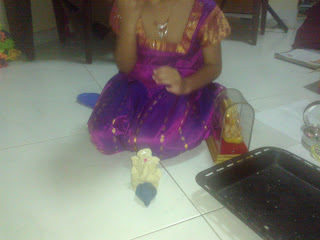 Finally, the daddy ganesha, the mummy Ganesha and the baby Ganesha (as Sophia puts it), all ready to go into the oven 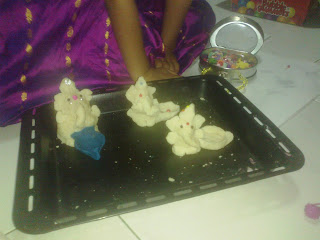 But wait, some photos needed to be taken 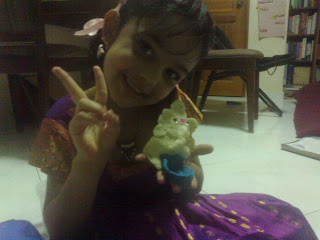 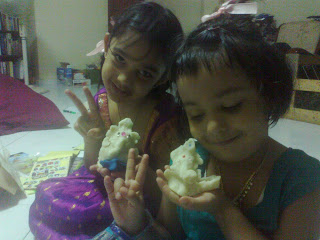 And then Anjali realized that the Ganesha in the model had a halo behind the crown. So we each had to make a halo. Finally, all ready for the oven.

A word before baking. I noticed in previous experiments with Salt dough that when pieces were stuck together, they had the tendency to fall apart when baking. This time, we used water to smooth out the joints before baking 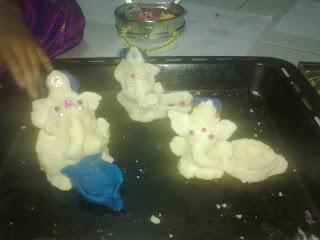 Salt dough has to be baked. We did ours at 100 degrees for about one hour. 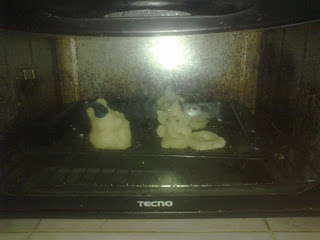 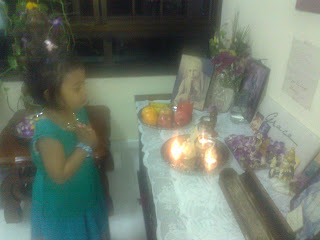 A note on the statues: We have done a couple of times modelling with salt dough. But we noticed that the dough tends to absorb ambient moisture over time and gets soggy. I suppose some kind of sealant will help preserve the statues, At home, the maximum they have lasted so far is about a week.