Sophia and the temperature taking exercise

I received a call in the office a couple of months ago from Sophia's teacher. I was a bit surprised about this.

"Mrs Curic, Sophia has not recorded her temperature and she has been marked absent without valid reason". I didnt really understand this point and later found out that the school had asked all students on home based learning to record their temperature before 9am to mark their attendance.

I later forgot all about the episode.

I received the same call from the same teacher last Friday.

On Wednesday, Sophia recorded her temperature before 9am.

On Thursday, she woke up late, and yelled at Anjali (the rest of us tell her off for yelling)

On Friday, she woke up at 6am, marked the attendance and went back to sleep

On Saturday, she will wake up at 11am

This is starting to sound like the hungry caterpillar

Having a secondary school kid is strange. The first holidays and she is asking for permission to go out with friends, three out of five days. The Whatsapp messages come in almost non stop through the afternoons.
I tend to snap a bit if I catch Anjali with the phone longer than a short period and yesterday I took the phone away.

Much of her homework is done on the laptop, and she often has the earbuds on with music.

As a mom, this took be aback a bit - it is, afterall, very challenging for me to realize that my girls are growing up so fast.

I took a step back yesterday to reflect on it and realized that it was not that different during my teenage years. We went out with friends, ate at McDonald, and though there was no whatsapp, my dad used to complain that he couldnt reach us from work because the phone used to be constantly engaged.

It was supposedly homework, but we used to go from homework to lame movies and gossip about classmates.

While there was no spotify or whatever she is using for music, I do remember taking the family walkman for a walk whenever I could get away with it and bugging my parents to buy cassette tapes.

So I guess the tools have changed but people havent. There is an odd comfort to be taken there?
No comments:

More than a year since the last writeup with lots happening. 2019 has gone by. I have two young ladies at home now, both stretching their teenage limits

Highlights of 2019
Jan
Both girls went on the podium at the Singapore International Duathlon. This was out only podium race for 2019
The girls gave a talk at Microsoft for the Microsoft IgNite tour
We did our tallest mountain climb to date and reached the summit of Mount Arjuno at 3339m


March
Anjali was part of the panel "The future is FOSS" at FOSSASIA 2019
We took part as a family in the FOSSASIA hackathon and got a prize
The girls won second place in a dance competition for Nainowale ne. A good number of dance podiums this year.

June
A two week, rather stressful trip to Romania, most of the time there was spent reviewing and preparing for DSA exams

July
A whole bunch of DSA exams and a general period of stress receiving rejection and shortlisting notices and going for exams and interviews.

August and September
Quarantined at home, studying and stressing. With a few races in between. Got scolded by thattha for staying too late at a dance competition that the girls won

Anjali got into SST via DSA, bringing welcome relief to the family.

Still under general PSLE stress, and signed up for Hack for good and Hack Asia in the middle of the exams - just because

October
Exams were finally over. Went on an impromptu, expensive an totally useless trip to legoland, which scheived the objective of getting off the radar

The girls took part in Hack Asia, organized by Daimler and recommended by Meenakshi. Thoroughly enjoyed themselves, ate good food and got fauned over by everyone

November
Had a blast of a time at Tech for good with Johann Annuar and the Engineering Good folks. The girls got featured in the newspaper and the channel news asia, shared their work with loads of people, got a ribbon, a minister visit to their booth and a best advocate prize. They went to Expedia office for a one day job shadowing as a prize

December
Had an EPIC trip in Newzealand, lots of driving, hiking, walking, parasailing and generally fun adventure. We switched off as much as we could to make time for each other

The girls closed off their year by sharing their Hack Asia project at Daimler.

Found time to host a small Christmas party after almost 3 years of not having one.

Looking forward to the Sec 1 and P5 year and planning more trips. 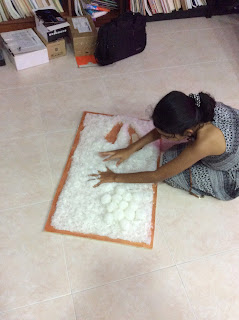 So Anjali turned 11 last week. There has been just too many things going on, what with races and hackathons that husband and I didnt really have the energy to plan any kind of celebration. Anjali was ok with a simple thingy and thattha and patti came over. 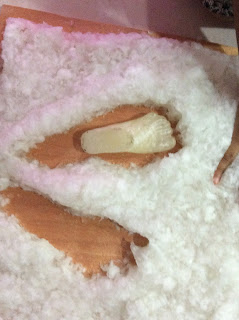 And then Sophia stepped in. She gave me a shopping list - chocolates, marshmallows and diapers. (I managed to find cheap adult diapers in the store)

And then the day before it was cream cheese.

Thattha asked patti whether she could get cake. Sophia gave her a withering look and baked her own cake. It was flat 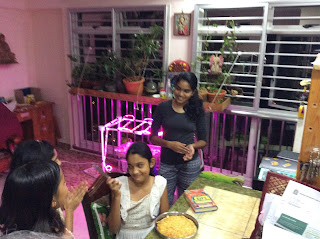 And delicious. Everyone had second helpings - even thattha. And Sophia got all the crumbs stuck to the tray :) She handled the party invitations and spent all afternoon cutting snowflake napkins

The theme, as I understand, was winter wonderland.

Hence the diapers and snowflakes and the cheese cake. I still have small amounts stuck to the corners in the living room 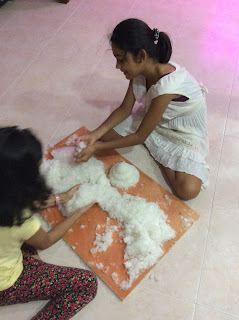 We told Anjali that she is very lucky to have a sister who plans her party.

As for me, I walked into the Jurong library and borrowed some books for the kid, and wrapped them up (in a upcycled plastic table cloth leftover from the cat cage conveyer belt).

Anjali enjoyed the books and the table cloth got folded and put aside for the next project, whatever it may be
No comments:

What happened to Sophia or when punishments backfire

Last night, Sophia wanted to learn "Oovoru pookalume" and sing it for a minute in Tamil class. I spent some time teaching her the lyrics and the song. Anjali, who was working with husband on her math, complained about the racket, and after 15 minutes looked up and said

"Sophia, what homework did you not finish?"

"I was wondering how to ask the same question Anjali", I said

"I have done my homework!", Sophia insisted "I just want to sing."

"I think I am going to not do my homework tomorrow, then I can sing"
No comments:

In coding and computers

Anjali is on a goal to earn a million dollars before she is an adult so that she is financially secure. This conversation is based on that.
Anjali. Mom, I didn't earn a single penny today.
Me. How much did you want to earn？
Anjali. 166 dollars.
No comments:

Recently, we attended a programme and learnt about journalling. One of the things we looked at is how a journal should consist of facts, feelings, findings and future.

Here is my journal

Facts
Anjali and I had an argument today. I told Anjali off for being rude and specifically teenagerish, and how she is flippant about stuff and doesnt work on things for long enough.

Later, looking through Anjali's homework, I noticed that her Math homework was rather advanced and done through very quick and dirty ways. Ordinarily, I would take atleast five minutes to solve them (it took me five minutes to crosscheck each question), but this girl had them all down as one liners with just the answer.

Feelings
I find that Anjali is very intelligent. However, with the intelligence, somes a feeling of superiority and entitlement. I am not quite sure, as a parent, what to do about it except to whack it off her, though I am not sure whether this would be a good solution.

Finding
I did notice, however, that Anjali cheered up at the pool. Is the next step to whacking play?

In other news, I am making good progress in R and data camp.
No comments: